Showing posts from May, 2007
Show all

Video: The Next Web documentary - Frankwatching

May 30, 2007
Wonderful documentary by The NextWeb conference that will start in June 1, 2007. I live in the Netherlands and can't make it... Bummer.
Post a Comment
Read more

Interesting article on the CMSWire about "Google changes Information management" . I've been wondering for some time how Google organizes their own company information ... I agree with most of this post. Some comments: I agree with the fact that the way Google is offering access to information is the way it should be: "fast and easy". However, that's the Internet. Now apply that to a company. When I search in my company I want to be sure I got all relevant information on a certain topic. Not the top-10 results that are usually enough when searching on the Internet. "Information is becoming increasingly critical...". I would say it is critical. Just look at all the workers. Where are they at? Sitting at their computers. What are they doing? Handling data, documents and information. Information is the blood of the organisation. About the information manager of the future. Result/Action-focus: great, I hope so. However I think that the professional
Post a Comment
Read more 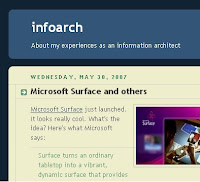 Practically finished reading "Wikinomics. How mass collaboration changes everything" by Tapscott and Williams. I'm fairly new to blogging and still see my blog as an experiment. However I'm getting the hang of it and I enjoy blogging more and more. But I've been trying to pinpoint 'why I blog'. On page 256 of "Wikinomics" I ran into the perfect description: In a traditional workplace ... problem solving (comment by blogger: or idea generation) might be worked out in the lunchroom, while leaning over a colleague's cubicle, over a pint after work, or increasingly through a long thread of e-mails. The problem is that this casual approach to problem solving leaves no organizational memory of the event, with the risk that only the people involved in creating the solution walk away with any new insights. Problems persist like a bad cold, and solutions will be reinvented every time the problem reoccurs. Social software provides companies with a wa
Post a Comment
Read more

Microsoft Surface and others

Microsoft Surface just launched. It looks really cool. What's the idea? Here's what Microsoft says: Surface turns an ordinary tabletop into a vibrant, dynamic surface that provides effortless interaction with all forms of digital content through natural gestures, touch and physical objects. Beginning at the end of this year, consumers will be able to interact with Surface in hotels, retail establishments, restaurants and public entertainment venues. But it also reminds me of two things I saw before. Surface looks a lot like: BumpTop 3D Desktop (also see the Youtube video !). And it also reminds me of Jeff Han at TED talks, Unveiling the genius of multi-touch interface design . Is there a connection?
Post a Comment
Read more

A couple of years ago I went to a course on speed reading andmindmapping. Ever since, I used mindmapping to structure mythoughts and keep an overview of my tasks. A colleague pointed me to a new(?) online mindmapping tool called Mindmeister . As a happy user of Mindjet's Mindmanager Pro - fantastic tool by the way! - I was wondering what this web mindmapping tool would bring us. It looks good and works OK too. But I didn't decide to sign up though: the free version limitats you to 6 mindmaps and that's nottempting enough for me... I hope Google will buy this webtool and integrate it in their Office suite.
3 comments
Read more

Just a week ago I contributed to Wikipedia for the first time in my life. Quite exciting! I wrote an entry for "knowledge mapping" , based on a definition used in several papers I contributed to. I also added 'knowledge mapping' to the "knowledge management" entry. I was (and am) very curious what would happen with the entry. So, I put a "watcher" on the entry, but that didn't seem to work (no alert that the entry was changed or moved...). Today I checked my entry and to my surprise I was redirected to the entry "knowledge management". My entry was removed and incorporated in this entry for several reasons (refer to "discussion" page of the entries). That wonderful! Within a couple of days this topic, that was missing in the knowledge management entry and in Wikipedia all together, now exists! Samuel
Post a Comment
Read more
More posts