Showing posts from June, 2017
Show all

Why don't we ask more questions? Or maybe you do, but I should ask more questions. Recently I encountered a problem I couldn't solved. So I reached out to colleagues to understand if they had answers. They didn't. Then I thought: should I post my question on Yammer or Twitter ? Yammer could work but I had basically already asked the relevant experts within the company so I thought that would be a waste of time. Then Twitter maybe? To be honest, I find the engagement on Twitter pretty low. When I started using Twitter asking a question could get you lots of answers. Now Twitter is more of an update platform and less of a question platform. At least that's how I see myself and others using it. Well, then I thought I'd post my question on Quora . Good 'old' Quora. I've always loved Quora. A very focused and smart platform with lots of people just waiting to answer your question. And Quora suggests potentially relevant people from your network and
Read more 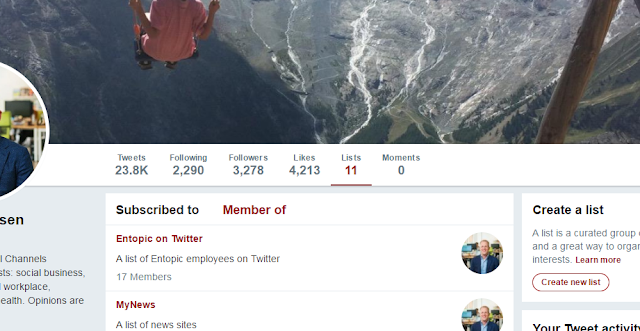 Recently Twitter updated its web and app interface again. Nice and round this time. One thing I was disappointed about is the fact that Twitter did nothing to make Lists more visible and accessible. If you don't know what a List is, you can find more info about them  here . I blogged about how I use them several times as well. Twitter Lists is simply a way to organize all the people you follow into... lists, of course. The way you use a List is up to you. You can put people on a list based on a topic they relate to, their importance, whether you've met them in person, etc. By having Lists you can focus on the people you want to follow, instead of just going through all the updates of all the people you follow. Lists help you follow more people than you can process and focus on the people who you really want to listen to and interact with. When I tell people about Lists I'm surprised how little people know they exist and use them. On the other hand people that bail ou
Read more
More posts