Manager 2.0 - Key Elements of Leadership Concepts in an Enterprise 2.0 #e20s 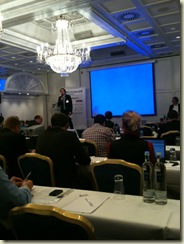 I'm at the Enterprise 2.0 Summit in Frankfurt! I'll be live tweeting through this summit. I'll also try to summarize the talks as they pass by.

Collin wonders if 2.0 is a good extension in Enterprise 2.0. 'It's just a version number'. It doesn't stress enough the future enterprise will be totally different.

Information is the new steam. The industrial age is passe. And it's moving fast. He tells about how long it took the book and the pc to move into our world. And relates that to the speed in which the Internet moved into our world. This has implications for leadership!

How should be define leadership in this new information era? Here's one: a leader can be defined by an ability to get others to be connected willingly.

Leader for the Enterprise 2.0 era:

He's the farmer of trust and a skills harvester.

Trust, walk the talk (is critical), you have to be what you see, be transparent, imagine, recognize and give (say merci!), to update and be update, to dare, focus on IT usage and not on the tools, to stimulate, to coach, solidarity and humility. 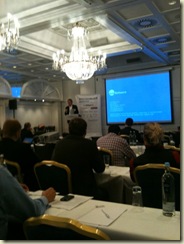 Now, Rolf Schmidt is up. What defines a great leader?

Listening is important. The CEO don't know anything anymore. The distance between them and employees is too big.

You have the power, but don't have a knowledge, this goes for most CEO's. You have to be engaged, says Rolf Schmidt.

Hardly any can come up with a great idea on their own. Points to the book and research by Steven Johnson, 'Where do good ideas come from?' Great ideas come to being by sharing.

Social networks (esp. Facebook) are key. The company is a social network. They developed an internal tool, Just Connect.