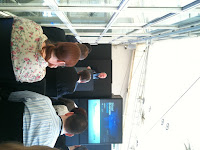 Next talk (no slides!) by John Hagel about Cascading Change: Small Moves, Smartly Made, Can Set Big Things into Motion.

We are moving to a world of increasing returns. This world is very different from the world we were in, the world of decreasing returns.
This movement can be typified by moving from business as stock to flows. Stocks was about: build up knowledge, protect it aggressively and capitalize on it. But in a world of excelerating change, these knowledge stocks rapidly diminish in value. (Except for companies like Coca Cola.) New opportunities are in the area of knowledge flows. And this is where social tools come into place. Not only used insides companies but also over institutions. There are even more values between institutions than inside them.

Some say we should move fast here. But Hagel's approach is: move slowly so they trigger cascades and are sustainable over time.
Social software adoption approaches:
What's missing here? The systematic link to metrics that matter. If we roll out social tools in a more targetted way, it will really matter to the organization as a whole. (Hagel doesn't imply the above-mentioned adoption approaches should never happen. His point relates to what will matter on the long run.) This usually also changes how social media is seen (as most think it's not for business and purely for fun).

Hagel also stresses current and future business will be about exception handling. And social tools fit better on exceptions than other IT.

He points to the idea, implementation and effect of the SAP Developper networks as a good example of what he means. Sustained performance improvement by reputation and relationship development.
Relating to this example, it was started at the edge of the enterprise. That's where new stuff begins and has growth potential. That's where social software can have the greatest impact. It can be used as a change catalyst. Social software is more than technology.
They also focused on metrics that matter. For instance the number of calls they got to the call center. So they tracked those numbers. Pace of adoption of the SAP software was also a metric.