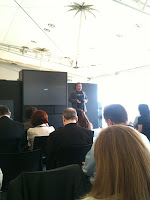 JP Rangaswami takes the stage with the first talk titled: Nature doesn't do SLAs.
It's a shame that we live in a world in which we need a term as social business. It's tautological. We are rediscovering something we lost.
The Cluetrain Manifesto helped him see this again. We lost something and need to refind it.
His talk was built around three concepts: change, context and conflict.

Change
Work is changing: "Historical businesses were hierarchies of products and customers." We have been overlaying the industrial age model on knowledge workers. We did the same for healthcare and education, he remarks. And we now see this doesn't work and is generating problems. Knowledge work is not linear, not repeatable, not a process.
Knowledge work is lumpy. And the good thing is the tools are changing rapidly as well.
Change is a constant. He illustrates this with the touch innovation. And voice, talking to and with devices.
We are moving from process to pattern. We are spending more time dealing with the exceptions instead of the rule. We need tools and people that helps us identify these patterns. In this context failure is essential. Failure is future proofing. Really try to understand why things work and why things did not work. There's valuable learning there.

Conflict
There's conflict between sharing and not sharing. We are still finding out where openness is fitting and where it isn't. When we should keep things private and when to share the information. The interesting thing about the young is they work seamlessly in this new open world. There use of tools and security features is more granular. Their concept of ownership is also different and not the same as the older generation. This relates to the second conflict between personal and collective.
He also mentions two other conflicts shortly: between static and dynamic and between linear and nonlinear.

This is an exciting time because it's a kind of a renaissance. We are refinding something we have lost.
UPDATE April 6, 2011: Corrected text, added picture and links.
business social business social media