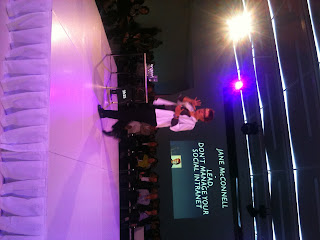 Next keynote at the Intranet Conference (Congres Intranet) was Jane McConnell. Her interesting talk was about how the social intranet should be governed. Or shouldn't it be managed at all?

Jane's central statement was: Lead, don't manage your new intranet!
But she started out by asking the audience to raise their hands when asked who owned the intranet. HR is clearly the missing player in the intranet. Hardly any of the audience could say HR is the owner or one of the owners of the intranet. In most cases (76%) Communications is the owner (with IT in second place). But a surprisingly large number could says the have a holistic team (10%). Meaning the intranet is owner by at least Business, IT and Comms.
But these departments are losing control due to social tool deployment.

How boring most people think governance is, it is the key to a successful intranet and also to successful change of the intranet. Governance does not imply control, but leadership. Without governance your intranet will become or is irrelevant.

Intranet users mostly have two big issues: I can't find what I need. And, where should I put my team place/information? (I blogged about this last topic some time ago.)

According to Jane's research the top internal social tools are blogs, wiki's, commenting and social networking/microblogging.

Jane advises us to move towards a new governance model: holistic. The development of the intranet is conducted by representatives of the organization instead of just Comms and IT. And the governance should be embedded in the organization. Set up a minimal number of rules or recommendations for intranet definition and improvement.
A good idea she mentioned was to be clear about the level of experimentation that his allowed wrt. the intranet. Provide a process for managing experimentation spaces. This is important because we all are still learning what the social intranet will be and how it is best governed and led. Therefore room to try and fail is important. "We haven't cracked it", Jane says.