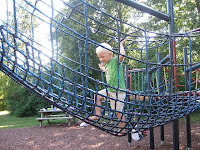 I've always been intrigued by the concept of learning. It's one of the reason I like blogging so much and social media in general. It's a great way to learn!
Every now and then I bump into a great post or interview about this topic. Just recently I read a great interview with John Seely Brown and Douglas Thomas about their new book 'A New Culture of Learning' (part 1 and part 2). I was planning to read the book. After reading this interview I'm going to push it up on my to-read list. Thanks Henry Jenkins for sharing this interview with us.
I'll share some interesting statements from the interview with you here:
Good stuff eh?! There's much more in the interviews. And surely even more in the book.
communities culture dialogue HR