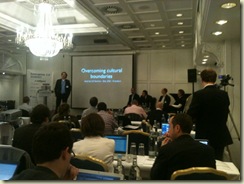 Bertrand kicks off by focusing on Cultural issues in general, between Europe and the US and it's implications for Enterprise 2.0:

Bertrand says this is a major issue and it's a good thing we are discussing it here. Every country with its own culture has to find it's own approach wrt e2.0.

Now Mike Thompson (Headshift) who collaborated in a large research project on Enterprise 2.0. This research is still going on. First results can be found here. He says the research shows that it's more related to company culture than country culture if and how enterprise 2.0 concepts and tools fit. Ellen doesn't agree with this and does see country difference. On the other hand, Emanuelle agrees with Mike relating to the situation in Italian companies. Emanuelle says these cultural issues were there way before E2.0. And to him the biggest challenge is to demonstrate what's in it for them when rolling out new tools in general.

Agreement between the speakers is that culture is important. If it's a country or company issue is still open for debate/research.