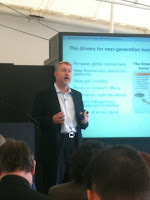 Dion Hinchcliffe's presentation starts with the drivers for next-generation business:
The current customer engagement landscape consists of traditional and digital (internet) channels. We tend to approach these two in the same way.
Channel fragmentation is now the norm (networks and devices). Customers have moved and companies have fallen behind. And this will get worse.
The most important channels where your social business takes place are:
Dion went on to give a list of results social business can give:
So where did social business come from anyway:
UPDATE April 6, 2011: Added pictures and links, corrected text.
enterprise 2.0 social business social media